Again I am faced with the disgusting reality that when my eyes opened at 9am this morning I had to watch three hours of television. I had to check my twitter feed, which is like wasting time by wasting time. And then I saw this on facebook: 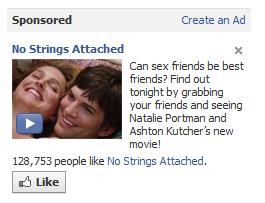 Obviously the movie is stupid. Obviously it is a bad thing for society. What caught my eye though was that this ad is stating that in order to answer the question “Can sex friends be best friends?” you have to see this movie. Movies don’t answer questions like that. They are providing a look into one person’s vision as to the answer. Good filmmakers just provide you with the tools to ask yourself questions. But it’s not fair to compare whoever started writing a project that was originally titled “Untitled Ashton Kutcher/Natalie Portman project” to good filmmakers. It is fair, however, to demand that just because you had one thought about one subject that it is not correct. That people should not listen to it and think wow, you’re right that is how I think about that now. Especially when it comes to love and shit. Love and shit is complicated. Love and shit is not answerable in a script.

Lots of people are stupid.

This is my ultimate point is that lots of people are stupid. Also lots of people talk. Therefore the overlap on the venn diagram is going to be significant. We shouldn’t be listening to people just because they are talking.

I watched a lot of CBS’s answer to The View: The Talk. It’s worse. Somehow they managed to get a larger group of more incoherent, more disagreeable people letting the loudest and dumbest voices speak loudly and then end with, “each of our opinions is valid.”

We don’t all have valid opinions. Some opinions are dumb. They need to be challenged and when a person refuses to challenge their own conceptions and instead look wackily at the camera as though they just made an obvious point and are simultaneously auditioning for The Office, then that person needs to be told to shut up. I’m not saying we can’t listen to people, but when people refuse to listen to other points of veiw, they lose their right to have their point of view listened to.

I think I’ve summed up enough hypocrisy to get to the point: I’m not wasting any more time because of hulufriday and twitter – they are just new excuses.