I friend a lot of my friends’ moms and dads on facebook. I am of the first generation of facebook – my college was within the second wave of people to get facebook and though I held off for my entire freshman year, I have been a part of f-book history. My generation is also the sons and daughters of people around 60 years old. 60 year olds are typically not very good at using social media, which comes from a burning desire to be good at it and a terrible lack of understanding of what it is.

I tricked my dad into getting facebook, and he’s the worst at it.

Rachel is my friend/comedy partner. My dad later called me and asked if Rachel was serious about going to lunch because he wasn’t sure he wanted to, it seemed like a lot of work.

Let’s update you on my other friends’ parents and their activity:

1. A mother writing a defensive post about how rejoicing at the death of OBL is valid

3. A mother with a series of posts attempting to alleviate the “nasty situation” of accidentally asking all her friends to buy an I-pad.

4. A mother posting a series of right wing vs. left wing talking points being argued over comments on statuses between a mother and her brother.

5. A mother who only has two interests listed: Beacon Institute for Rivers and Estuaries, and What animal is your spirit guide?

I guess I’m friends with less dads on facebook. I am friends with my friend/comedy partner’s dad, but I don’t harass him nearly enough. 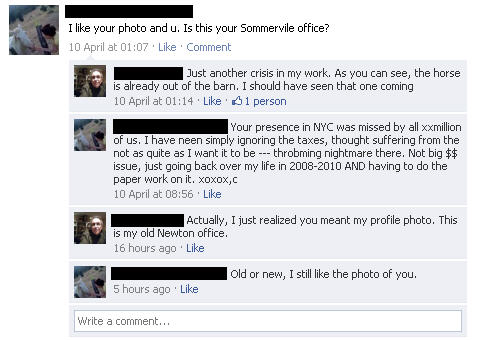 I think it’s hard to troll people who don’t understand how you’re trolling them.

Here’s what I see as the major problems for 60 year olds on facebook:

I was originally very confused when people started writing things on facebook that they meant – that they treated this vaguely anonymous online community as a place to spout their actual opinions and actual values. This didn’t make sense to me. Wasn’t this a place where we were supposed to say things that were silly and pretend we were in love with Harry Potter prequels or Macedonia? But now, they’re taking over.

They are the people of elderly affliction who believe in the necessity of honesty even in internet interactions.

They are right. If we are to make okTwitFace the main form of communication of our culture, then it should be one that isn’t laden with fake insults and sarcastic comments. One of my favorite facts is that sarcasm is the last thing that gets learned in a new language. Well, technology is a new language to these people and sarcasm is not learned yet. Because they mostly interact with each other, they aren’t learning it yet.

I don’t have a solution, nor do I think there is one. Maybe there isn’t a problem in the first place.